That’s Amanda Leatherman of course chatting it up at the table. Amanda plays a big role on the show as she spends a lot of time adoring her favorite poker player… Doyle Brunson!

That’s “Amanda’s couch” where she hangs out, watches the action and talks to the players, etc. 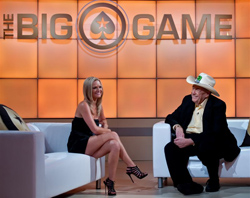