Back in the Day

In this pic, on the left and sitting is Randall. Randall was my brothers best friend and they used to hang all the time. My parents always loved Randall, he is a big guy with a big heart. He was also the guy that made sure when I won money playing pool that the guys would pay me. I was real small and skinny and sometimes people would try playing the “double or nothing” game with me until the number got so high they figured they’d just dodge me. No joke, I played a guy once for $2 a game and we ran it up to a $3200 debt! He wanted to play me double or nothing again for $3200, but I figured he couldn’t pay. I was right.
I never got the whole amount, but Randall was in charge of collecting that debt for me, and let’s just say that he was more persuasive than I could have ever been.
Behind Randall is Sheldon “the roofer.” That’s the nickname my dad gave him and it’s a long story. That guy Sheldon is literally the guy who started my poker career. Sheldon is a good dude, but he isn’t the best poker player. He used to come over to the house and play me all kinds of poker games and I swear I don’t think he ever won. He didn’t have any money either, though, so Sheldon, for lack of a better word, became my bitch! My parents would tell me to cut the grass or pull the weeds from the pool area (I hated pulling weeds) and I’d call Sheldon, “You wanna knock of $20 from our debt? Come by the house, we have work for you.”
Sheldon lives in Victoria now and he was nice enough to fly across the country to be there for the funeral. Sitting in the middle is Mikey Spencer. Mikey used to always be ridiculously ripped. He worked out like 36 hours a day or something like that, but still, he never seemed to be able to bulk up his chicken legs, lol. I used to spend most of my time back then with Mikey, his brother Tony, Oren and Regev, back at the Spencer house. Up top and to the right is John Anderson, Randall’s brother. John was a bit of a bad ass growing up. He was the best break dancer in the school and was a pretty good football player along with Mikey who was a wicked running back at A.Y. Jackson. John was in a bad car accident many years ago, but he seems to have made a full recovery and is doing well. Sitting bottom right is resident joker Nigel. Nigel used to talk a lot of smack, and John would routinely beat him up when we were kids. One day, after about the 100th time Nigel got a beat down, his mother grabbed John’s arms from the back and yelled to Nigel, “Lick him!!!” That was probably the only time Nigel ever got the best of John, thanks to an assist from his mother. ***************************************************************** On Sunday, my friend Angie got us two floor seats to the Raptors game and I had a blast at the game! The Raptors lost, but it was an entertaining game nonetheless. After the game me and Ang had a drink at Jack Astor’s, then I headed uptown for a reunion that was like 20 years in the making. My friend from grade school, David “Fuzz” Gold was at the game and saw me on the floor. I told him to round up the troops for a get together, so he made a few calls and we decided to meet at Moxie’s, a very cool restaurant/bar in Richmond Hill. David and I got there early and reminisced a bit. He’s doing really good these days, owns his own business and keeps busy. Not too long after, we were joined by Junior, a guy I hadn’t seen in the longest time: 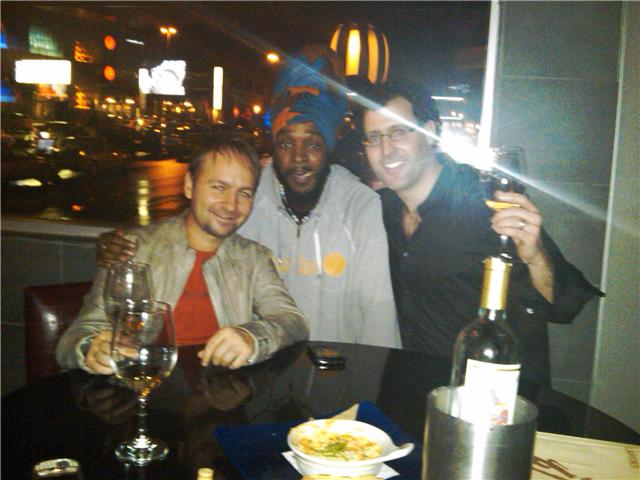 I don’t think I need to tell you which one is Junior and which one is David “Fuzz” Gold, should be a pretty easy read I would imagine! It was so good to see Junior, he is doing really well. He has an awesome family with six kids! Busy woman. I guess in his early 20’s he became a full on rasta and that turban sits about two feet on top of his head! I couldn’t rock that look, but it works for Junior. I don’t have other pics, my Blackberry WorldWide is a piece of junk and doesn’t have a camera on it at all. It’s the only Sprint phone that works worldwide, time for an upgrade. Anyway, these days Junior makes music videos and seems to be doing really well. Not too long after that, a real blast from the past, my buddy Vaughan showed up! This guy hasn’t changed a bit! Both he and Fuzz brought in some yearbooks from the late 80’s and I can’t believe what I wrote in Vaughan’s yearbook! It’s actually really funny, but I just can’t type it out in the blog, because then all the nutcases will think I’m a racist for real! Vaughan’s brother came, as did Mark, another Zion alum who is rapping these days, and then a real shocker, the Rocket showed up. Rocket was a sick athlete back in the day. In the 6th grade he ran the 100 meter in 11.03. Yeah, that’s pretty fast for a little kid! Rocket is coaching track these days. It was such a fun get together, man do we have some stories. I was a tough kid that didn’t back down even if I knew I was gonna get a beat down, and Vaughan reminded me that he was the first guy who fought me at PineWay. I told I could take him now… I get brave when I drink, lol. Eventually the place was shutting down (we were loud) and we had to take Fuzz home because he was making a bit of a mess out front! The night wasn’t over for us though. The boys took me to a Jamaican club on Yonge St. Security was tight, cops outside the door, and I got screened twice, but eventually we got in. There was a couple hundred people there and something about it just felt soooo familiar to me. It just reminded me where I really came from and how I grew up. My friends would say I grew up in the hood, but I didn’t. I grew up NEAR the hood and just happened to hang out there all the time. They didn’t see it as making a difference.
I was literally the only white guy in the club, and that’s pretty much how things always were for me when I went out back then. I never really had many white friends until high school. Actually, that’s not quite true either. Most of my friends at Zion were Asian, and most of my friends today are Asian. I felt completely safe at the club, but the boys went out of their way to protect me. Someone always had a hand on my back, or were grabbing my arm directing me where I need to go, and where I need to stay away from. It’s a different kind of scene, and if you aren’t used to it, I could see how it would be intimidating for some. After that club closed down we ended up just loafing in the parking lot. Just like old times, talking about all kinds of stuff from whether Michael Jackson was a pedophile to whether Kanye West gets robbed at awards shows. Most of the night we talked about rap and I ended up being the judge. It was pretty unanimous that no one could spit like Biggie Smalls, and also that Jay Z didn’t have that extra kinda flex to compare with Biggie. He was the man. Then the debate got crazy when we talked about who spit the best on that track Forever, Drake, Kanye West, or Eminem. I think I surprised them a bit when I said that I thought Drake killed it, Kanye was solid as usual, but while Eminem is capable of things no one else is, his rhymes were a bit too quick and they didn’t resonate with me on this track. I gave the edge to Drake. We also talked basketball. Some of the guys were part of the best team in the city back in the day. They won the city championships at Vanier, but the next season, because most of them transferred, they couldn’t play. Season after that, it looked like they’d go all the way to the nationals with Vaughan running the point. However, Vaughan didn’t care too much for people running their mouth, and after a game where you are supposed to shake hands and say “good game, good game,” Vaughan decided to shut one of the trash talkers mouth. That ended that season! Vaughan still has the DVD of the game when they won the city championship, I’d love to see that. I was such a stats geek even back then, I tracked all the points, rebounds, assists, steals, and blocks for all the players. I even remember Vaugan’s stat line: 2 points, 7 assists, 3 rebounds, 0 blocks, and 2 steals. He was a true point guard. Man I miss those guys. Woke up a part of me that’s been dead for a long time. My roots, where I came from… they reminded me. Easy Ranks, easy Toots, till the next time we link up.
]]>